What do celebrities Natalie Portman, Emma Watson and Benedict Cumberbatch have in common? All have been seen wearing items that – to the untrained eye – might look like they're constructed from animal leather, but are actually made using cutting-edge vegan leathers that are beating animal leather on performance, sustainability and fashion credentials.

Leather is often described as a by-product of meat farming, but the reality is very different. It contributes a large portion of revenues to livestock farmers, and in some cases outweighs the revenues generated from the meat (for example in ostrich farming, where the skin is worth four times the meat’s value). As such, the technical term for leather is a co-product, meaning that it's a commercial product in its own right.

It's certainly a lucrative industry, worth around $400 billion, with over one billion animals killed every year just for leather. Many species are bred and hunted for their skins, including sheep, lambs, goats, pigs, zebras, bison, kangaroos, elephants, crocodiles, alligators, ostriches, lizards and snakes. But the most used and abused animal is the cow, with 290m currently killed every year for their skins, estimated to grow to 430m by 2025.

The numbers are overwhelming, and it’s clearly a grim picture for all the animals involved – but what’s the real impact of animal leather to people and the environment, is there such as thing as ethically sourced leather, and what about vegan leathers?

Where does leather come from?

We buy leather products – bags, shoes, wallets, jackets – without knowing where the skin came from; or anything about how the animals were kept and killed; or how the people involved in their production were treated.

Your beautiful (and expensive) butter-soft leather bag may come with a lovely ‘Italian leather’ tag, but all that means is that the bag was finished in Italy – the skin could have been imported from anywhere. In fact, nearly half of the global leather trade is carried out in developing countries, including China, Brazil and India, where animal rights are almost non-existent, and leather-workers suffer daily exposure to a toxic stew of life-shortening chemicals. Suddenly leather doesn't sound so sexy.

Leather's impact on the environment

Leather is no friend to the environment. A massive study called Pulse of the Fashion Industry (published by Global Fashion Agenda and The Boston Consulting Group) compared the  environmental impact of a wide range of materials commonly used in fashion, from cradle to grave, using data from The Higg Index, the leading assessment for standardized supply chain sustainability assessment. The data shows that animal leather has the worst environmental impact of all materials used, more than twice that of PU / polyurethane-based (plastic) leather (see below). In fact, the research showed that 3 of the 4 worst materials for the environment, per kilogram, are derived from animals (leather, silk, inorganic cotton and wool). 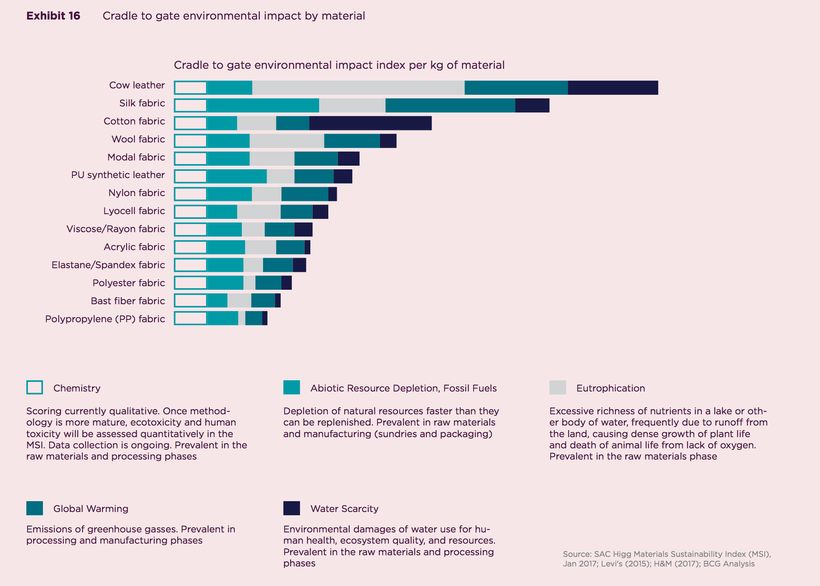 Leather production has such a devastating impact on the environment because it hits it from so many angles. Firstly there’s the use of preciously limited resources (water, land, energy) that’s required to farm the animals in the first place, and the food that's needed to feed the; and the resulting deforestation and loss of natural habitats.

The recent fires across the Amazon have shone a light on the role that meat and leather production have been having on the destruction of the rainforest in the region. As long ago as 2009 Greenpeace published a report called Slaughtering the Amazon, which stated that the demand for leather specifically was a key contributor of the destruction of the Amazon. As The Guardian reports "Researchers found cattle ranchers were clearing rainforest illegally despite laws protecting it.. One hectare of rainforest was being lost to ranches every 18 seconds. Through a murky supply chain, Brazilian beef companies were then supplying leather to leading global fashion brands and retailers."

Then there’s the waste products from livestock farming, including CO2 emissions (approx. 15% of all human-induced emissions globally), excrement (130 times as much as the entire human population, without the benefit of waste treatment plants) and waste water.

And then of course there is the toxic nature of the tanning process, that's required to turn a raw animal skin into a durable fashion material that doesn't biodegrade while you're wearing it (because no-one wants shoes that rot on their feet). Leather tanning is a highly water-intensive process, and it also creates a large amount of wastewater, with a heavy pollutant load.

A toxic stew of chemicals are used, including mineral salts, formaldehyde, coal-tar derivatives, lead, dyes and cyanides; and most leather produced in the world today (including in the US) is chrome-tanned, releasing carcinogenic Chromium IV into the water table. This is such a poisonous chemical that – as a result of stringent laws that regulate its use in the US and Europe – many tanneries in those regions have had to close. Unfortunately those same regulations don't apply to where the majority of the world's tanneries are based, in developing countries, and these serve luxury and fast fashion brands alike.

As most leather production occurs in developing countries, most leather workers are not protected by any health and safety legislation or basic worker’s rights; they are usually paid below a minimum living wage; and child labour is common. In addition, they face severe health risks from constant exposure to toxins in completely unregulated conditions.

As reported in The Guardian, within Bangladesh, PETA India “documented workers, including children, performing hazardous tasks such as soaking hides in toxic chemicals and using knives to cut the skins.” In Pakistan, research has shown that “waste discharge from tanneries pollutes the air, soil, and water, causing serious health problems. Exposure … has been seen to culminate in a multiple array of disease processes such as asthma, dermatitis, hepatic and neurological disorders, and various malignancies”. The film The Toxic Price of Leather serves as a disturbing summary of the human cost of the leather industry. Something that everyone in the animal leather industry is very keen you never find out about, as who wants that on their conscience?

The abusive treatment of animals reared for leather is well documented. As reported in The Guardian, PETA's video Hell for Leather ‘tracks a pathetic caravan of cattle between India and Bangladesh as they are driven along dusty roads for hours and hours, abused and tortured with every mile. Finally the animals are skinned (in front of each other) in the back streets of Dhaka. The skins are processed in makeshift tanneries with workers, including children, knee deep in toxic chemicals.’

In India, a PETA investigation found that workers were breaking cows’ tails and rubbing chili peppers and tobacco into their eyes, in order to force them to get up and walk after they had collapsed from exhaustion on the way to the slaughterhouse. Sadly these examples aren’t anomalies, but rather the reality of where much of the leather found in our high street and even luxury brands comes from. Even in the US, “many of the millions of cows and other animals who are killed for their skin endure the horrors of factory farming – extreme crowding and deprivation as well as castration, branding, and tail-docking – all without any painkillers. At slaughterhouses, animals routinely have their throats cut and some are even skinned and dismembered while they are still conscious.”

But what about 'ethical leather'?

Also sometimes called eco-leather, ethical leather often refers to practices such as the use of leather off-cuts in making leather products (reducing the use of resources); and the use of non toxic 'vegetable' dyes in tanning (which is obviously an improvement on the use of chemical and chrome-based dying).

Using leather off-cuts, i.e, using less leather than might be used otherwise, is better than using more – but the fact remains that the material used is the same, with all the harmful environmental, animal and human consequences outlined above.

In terms of vegetable tanned leather, the name is actually misleading, as it's not vegetables that are used but tannin-containing tree bark. Acquiring the tree bark means stripped the tree of it, which kills the tree. As such, vegetable-tanned leather also contributes to further deforestation and habitat loss, making it – in our opinion – a greenwashing tactic.

A further key consideration to the sustainability of leather is that the majority of leather's environmental impact comes from what takes place before the tanning stage, as a result of livestock farming. And of course there's no getting around the fact that the animals are still killed for both their meat and their skins, which we believe makes it impossible to be categorised as ethical. Happily, there is a much more ethical and sustainable choice that can be made instead, and one that is increasingly more fashionable too.

The ethical and fashionable choice

For a list of vegan leathers, what they're made from and how they compare in terms of sustainability, take a look at our article What is Vegan Leather Made of – and is it Sustainable?

These days you don't need to compromise ethics for aesthetics. There is a world of high end and cutting edge fashion brands who are producing beautiful vegan leather shoes, bags and accessories – without using any animal leather. And a wide range of high quality vegan leathers on offer. In addition, constant innovation in materials technology is resulting in new, more environmentally-friendly and truly ethical leathers every day. Hurray to that!

Our Guide to Ethical & Sustainable Activewear